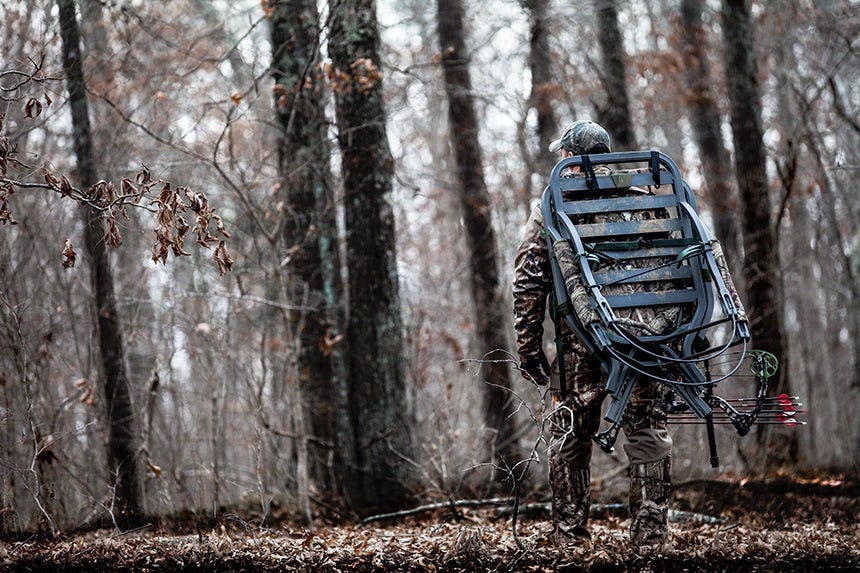 If there’s one word that best defines a rutting buck, it's “opportunistic.” Every cruising buck is constantly searching — seemingly at random — for any opportunity to breed. Movement during the rut isn't entirely random, though. While a buck might not always have a specific destination in mind, he’ll follow many different paths to check known doe holding areas until he catches the scent of a hot doe.

Those rut hot spots can and will change throughout the course of the rut, though. Have you ever been sitting a stand and watched as one buck after another headed in the same direction for seemingly no reason? That was likely because a hot doe was in the vicinity.

There's only one way to take full advantage of these shifting hot spots: You must be mobile. The ability to change locations in a matter of minutes is, quite literally, the most effective tactic you can employ when the rut is cranking. A climbing stand gives you the freedom to move more quickly and quietly than a lock-on/climbing stick combination.

One of my favorite rut strategies — the speed-stand system — is best accomplished with the aid of a climber. In areas that I've hunted previously, I’ll have a pretty good idea which thickets the does will bed in. Without fail, those are the areas that will see the most buck activity during the rut. What I can't predict is which area will see the most action on any given day. This is determined by what area holds a hot (or nearly hot) doe. Those thickets void of does nearing estrous will be buck deserts. Those holding interested does will be like Grand Central Terminal. As stated, there is no way to predict which area will be hot on any given day.

And unless you own a bunch of lock-on stands (and have them in place), you simply can't cover every area with pre-positioned setups.

With a climber, though, I'll hit several of them in a single day until I see activity that warrants spending more time in a given spot. I simply choose one area to start in first thing in the morning and give it an hour or two. If I don't see any promising activity in that time, I'll work the stand back down the tree, throw it on my back and move to the next area. With practice, this process can be completed in a matter of minutes, and because of the way Summit's climbers pack and function, it can be done extremely quietly. In the course of a day, I can usually cover four to six bedding areas.

Sure, this is an aggressive tactic, but I can assure you that it works and that the risks are worth the reward. Before adopting this system, I'd spent far too many ruts waiting on action that never happened only to check trail cameras in nearby areas to learn that every buck in the county had been cruising and traveling just a few hundred yards away and beyond my field of view.

The rut is not the time to be passive. Like the bucks you seek, you must constantly be on the move — and a climbing stand is the best way to remain mobile during the season’s most high-octane phase.