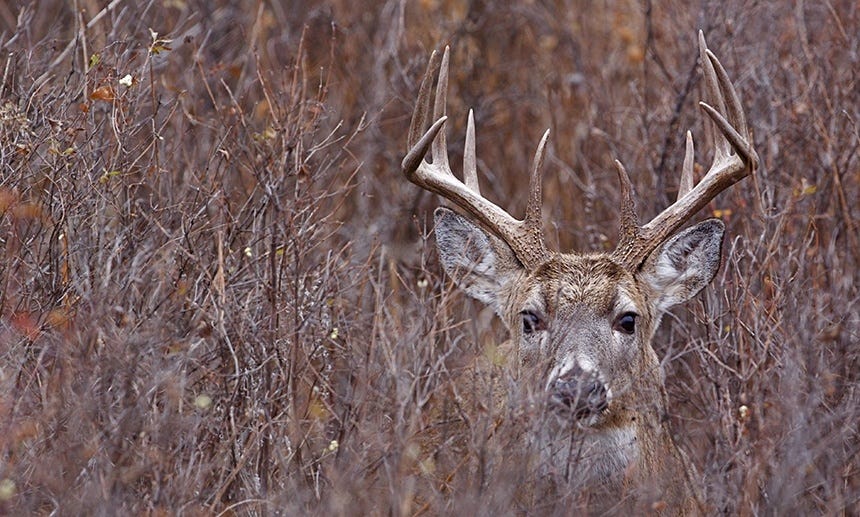 As the season progresses and cold temperatures descend upon North America, deer will be seeking good thermal cover to bed in. It takes consistent cold temps to push deer into this type of cover, but it’s going to happen before season ends.

Cover such as cedar thickets, heavy CRP, native grasses and areas that have been cut, such as hinge cutting, or just select-cut areas tend have good thermal qualities. Deer will seek these out as close to food as possible.

Often times, good destination fields or large food plots are not available. If this is the case, look for residual acorns that are close to this cover or something like locust bean pods — both are great food sources. It’s amazing what deer will eat in the cold months of late November and December. If there is ample food, they will be in those areas. Be sure to look for plentiful food close to thermal cover when scouting for the late season.

If you do have the food and right cover you’ll notice that deer, especially bucks that you’ve never seen before, will show up. With these ingredients, the late season can be the single best time to take a giant that you had no idea existed.

The single most important thing about hunting late-season deer, is that it takes very little pressure to bump them. Remember, they’ve been through the gauntlet of nearly 3 months of hunting pressure. They know every trick in the book by now and will be on edge.

When it’s bitter cold they may bed right on the edge of a good food source and nearly abandon the thermal cover. It’s not uncommon for deer to get up every couple of hours to feed when temps are especially frigid. At this point they’ll do whatever it takes to survive.

When deer are bedded tight on feed, it makes it very difficult to get in and out of a stand location. You’ll want to really strategize on how you are going to approach the situation. Hunting a day or so after bitter temps hit will usually allow you time to see how the deer are going to be using the area and approaching the food source. If possible, watch from a distance and form a plan.

Being mobile and ready to move when you figure out the pattern is key. As mentioned earlier, this can be the one time that you truly have a chance at a real giant simply because he has to eat to survive and will be more visible during daytime hours.

About the Author: Chris Parrish has won turkey calling contests at the highest level and has hunted up and down this continent. He has a well-honed knowledge of the habits and patterns of mature whitetails — having recorded 22 bucks in the Pope & Young and Boone & Crockett record books. He’s been an ambassador for PRADCO Outdoor Brands as well as many more. Chris has a passion for sharing his knowledge with others, so look for more of his articles here and at Moultrie Products and Code Blue Scents.